Cognitive decline or dementia is commonly observed in advanced aging even in the absence of disease. On the other hand, aging is frequently associated with physical and mental illness that evolve into cognitive and behavioral disorders.

Memory loss, language difficulties, troubles in carrying out motor functions, failure to identify objects, and difficulties in planning and organizing, all characterize early stages of dementia. It is common for some of these symptoms to be confused with normal aging or depression.

Dementia (from the Latin word for "madness" or "insanity") is not a disease itself but a series of symptoms that can accompany certain ailments or conditions. It is a broad term that can be defined as an acquired impairment of cognitive abilities that affect a person's function and safety. Often progressive and, in most cases, untreatable, dementia has to be distinguished from delirium: an acute decline in cognitive functioning (it may be viewed as an “acute brain failure”) in response to traumatic events such as major surgery, infections and metabolic or toxic disorders. Unlike dementia, delirium is often preventable (in up to 30-40% of cases) but it can evolve into a poor outcome if untreated. Accumulating evidence suggests that delirium itself might lead to permanent cognitive decline and dementia in some patients.

Both conditions are now being included under the expression “neurocognitive disorders” by the recently issued Diagnostic and Statistical Manual of Mental Disorders (DSM-V).

Dementia is relatively frequent in the elderly population and was shown to affect about 6.4% of European subjects over the age of 65 years. Causes of dementia can be reversible or they can become progressive and irreversible.

Alzheimer’s disease is the most frequent cause of dementia, increasing in prevalence from less than 1% in those below the age of 60 years to more than 40% in those above 85 years of age. Being a progressive and irreversible (degenerative) condition, care is actually a stronger issue than cure in terms of public health relevance.

Potentially treatable or preventable conditions of dementia are associated with cerebrovascular diseases (in the industrial countries) or HIV related neurocognitive disorders (in developing countries).

Neurocognitive disorders represent a multi-faceted problem: beyond the cognitive impairment, several other factors must be taken into account and dealt with, either regarding the patient (affective symptoms, such as depression and anxiety; function limitations; safety; stigma) or the caregiver (burn-out) or society (long term facilities, costs, prevention).

The mean of survival of patients with dementia has been estimated at 3 to 9 years according to the cause (7.1 years for Alzheimer’s disease). The total estimated worldwide costs of dementia were US$ 604 billion in 2010, about 70% of the costs occurring in Western Europe and North America. Informal care (greatly underestimated, including replacement costs and forgone wages) and social care constitute the largest part of total costs (approximately 80%). Impairment in daily living activities significantly predict the total costs of dementia patients; nursing home residence was associated with lower total costs than residence in the community.

Behavioral symptoms often go together with cognitive and functional impairment and may represent the major cause of distress for caregivers; moreover institutionalization or the need for a professional caregiver is often the consequence of such problems. Symptoms include agitation with purposeless activity (e.g. wandering, crying) and aggressivity, psychosis (hallucinations, delusions), apathy and emotional flattening, sleep disorders with disruption of night / wake cycle.

Late-life depression is common among elderly patients but it often remains under-diagnosed (and under-treated). Known risk factors are poor health and chronic diseases but also a reduction of social competence and personal control. It is noteworthy that in geriatric depression sleep disturbances, pain, fatigue, loss of appetite and libido, feelings of guilt and suicidal thoughts may stand above affective symptoms.

Cognitive impairment has long been identified as a component of late-life depression, and depressive symptoms are common in neurodegeneration; depression may confer a greater risk of cognitive decline in a cognitively intact population.

The possibility of a connection between life experience and the prevalence of cognitive disorders has long been discussed: it is a common belief that maintenance of an active life helps old people to preserve their physical and mental health; moreover there is a large amount of epidemiological data on the health benefits of social integration and social support.

The concept of brain reserve accounts for individual differences in susceptibility to brain changes related to age or pathology; cognitive reserve refers to individual differences in how tasks are performed that may allow some people to be more resilient than others. Leisure activities, education and occupational attainment seem to have a role in increasing cognitive reserve. 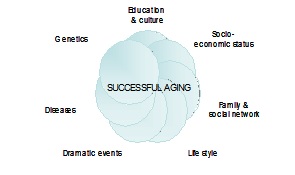