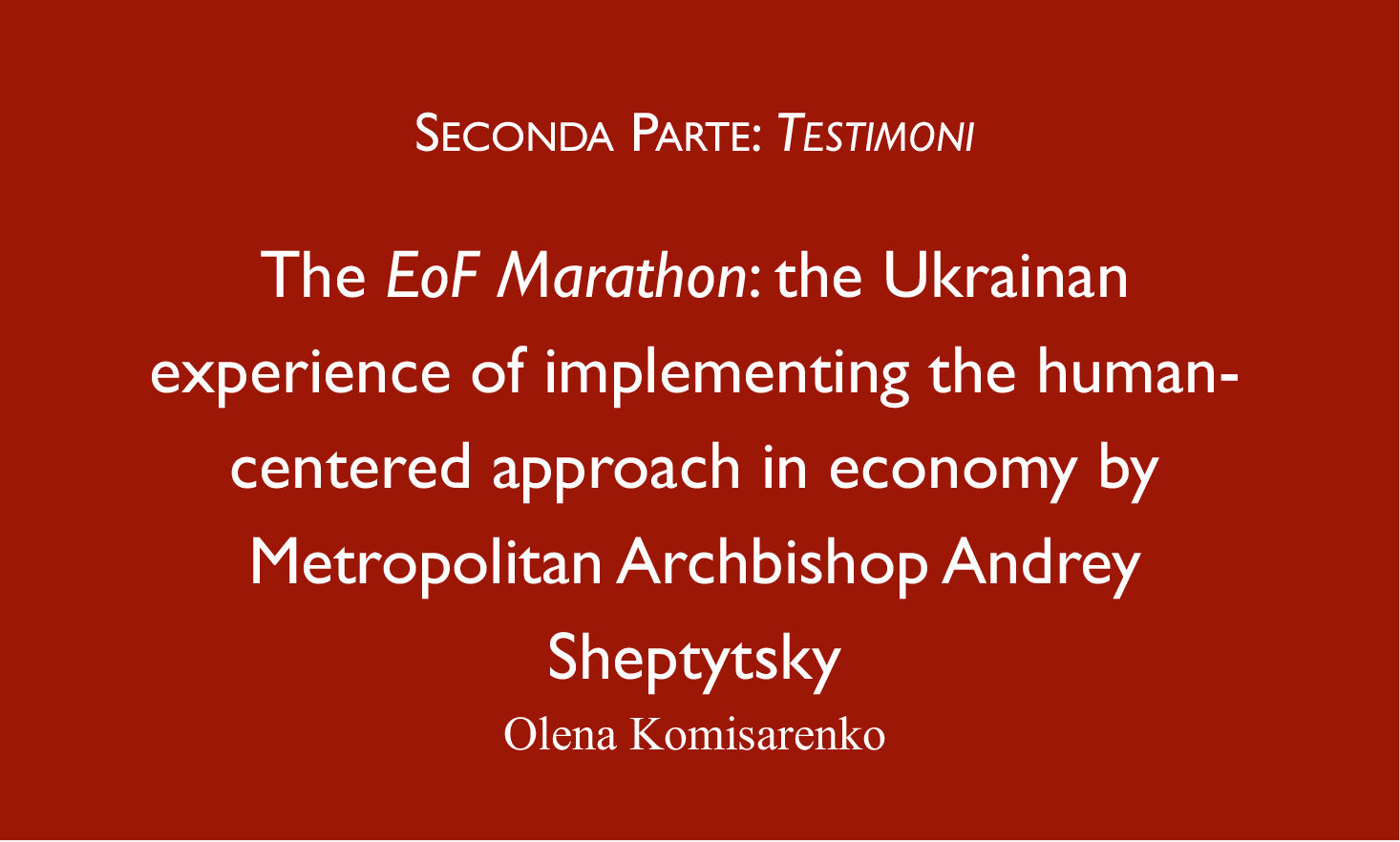 n November 20th, at 6:00 PM (Assisi time), on the second day of the Economy of Francesco event, an “EoF Marathon: around the clock, around the world” took place. Participants from 20 countries presented the uniqueness of their territories, cultures, experiences, local projects and calls for action.

The purpose of the Marathon was to tell the world what the youth were working on: connecting the big ideas of EoF to the local regional hubs, through projects and initiatives making a meaningful impact. They told their stories as they saw them through their local lenses. They shared their hope and determination as they felt them through their age and experience.

In this article we are going to focus on the beginning of the session that started with a brief overview of the impact of Andrey Sheptytsky on the history of economic thought of Ukraine and the importance of its contribution into the human-centered economy of the future.

Considering the historical dimension, we cannot ignore the footprint made by the Metropolitan Archbishop of the Ukrainian Greek Catholic Church Andrey Sheptytsky (1865–1944), who worked tirelessly for forty-five years in various directions not only for spiritual needs but caring for people entrusted to him and their material needs.

Metropolitan Andrey Sheptytsky served his people as a spiritual leader for almost half a century, until his death in 1944. It is important to us, people who live in different circumstances and face other economic, political and religious challenges in these difficult times, to refer to Sheptytsky's way of thinking, his actions in the field of economics, political discourse, and interreligious relations.

Sheptytsky's ideas in the field of economics had a deep spiritual, moral and ethical basis. He was successful in analyzing the economic realities of his time and developed a number of principles that were designed to solve the problems posed by the then economic system.

Sheptytsky lived in a time when the rhetoric of class struggle and the destruction of private property was loud. He considered that these movements were based on the logics of ‘zero sum’, hatred and even violence. In his understanding, this rhetoric was far from Christianity. Based on the principles listed above, he promoted an approach formed on mutual respect between capital and labor, equity for economic actors and the development of cooperation aimed at helping those who are in the least advantaged position.

The central point here is not only the moral basis of his thoughts, but also the principles he derived from this basis. The most important thing is how he turned these principles into a radically different reality for the faithful who were under his spiritual care.

Mobilizing the priests of his archdiocese to participate in a mass economic action, he founded reading houses in each village; promoted the establishment of cooperatives and financially supported them in order to increase their financial, production and sales opportunities; distributed the ranks of property owners, giving poor citizens the means to improve their living standards; encouraged fair trade, fair pricing and fair pay.

In the current context, The Holy Father Francis in various ways tells us that the modern world needs a truly human-centered economy. In his letter to young economists and entrepreneurs worldwide, referring to the encyclical letter Laudato Si’, Pope Francis said: “… today more than ever, everything is deeply connected and that the safeguarding of the environment cannot be divorced from ensuring justice for the poor and finding answers to the structural problems of the global economy. We need to correct models of growth incapable of guaranteeing respect for the environment, openness to life, concern for the family, social equality, the dignity of workers and the rights of future generations.”

How much different the world would be now if the ideas of Andrey Sheptytsky had been mainstreamed in the 1920s and 1930s? It isn’t too late “to acknowledge the gravity of the problems and, even more, to set in place a new economic model, the fruit of a culture of communion based on fraternity and equality” as the Holy Father Francis calls us to do.

Both Andrey Sheptytsky and the Holy Father Francis consider "brotherly love" as the main principle that we must always follow when talking about others or acting towards them. Ingrained disputes, which pass to persons, breed hatred and lead to violence - or at least tend to cause violence - were categorically unacceptable to Sheptytsky. Such behavior obviously contradicts the foundations of the Christian faith.

According to Marinovich, a Ukrainian human rights activist, philosopher, theologian and publicist, who conducted a value analysis applying Sheptytsky's moral teachings, the principle of ‘zero sum’ is as natural to humans as the principle of ‘an eye for an eye’. If a person gives in to the elements of his reactions, then he chooses them. This fate can be overcome only by culture, in this case by evangelical culture. And the vector of such a transition from the archaic law of revenge to the gospel law of love was set by Jesus Christ: «You have heard that it was said, An eye for an eye, and a tooth for a tooth. And I say unto you, Resist not evil. Whoever strikes you on the right cheek, turn to him the other also» (Mt 5:38–39). And also, «Ye have heard that it was said, thou shalt love thy neighbor, and hate thine enemy. But I say unto you, love your enemies, and pray for them which persecute you» (Matt. 5:43–44).

According to the approach of Archbishop Sheptitsky, firstly, from the joint concerted action ‘for the good of others’ (including prayer) is formed ‘added value’, and secondly, the source of this ‘added value’ is Christ, His grace. It comes from His promise to reward those who try to reconcile with their adversary (“love him”) and to work with him for the common good.

These theological formulas have practical application from Sheptytsky: «The welfare of the people is mostly based on cooperation. Through cooperation, through organization, through the unification of our forces, through order and unity, we multiply our economic forces and gain ten times» (Septytsky 2007).

In other words, by transforming the human spirit, directing it towards understanding and cooperation, we gain the energy needed for all other social transformations. And, as the Metropolitan was fully convinced, the source of this beneficent energy is Christ. Such an understanding of grace as ‘added value’, which appears where love reigns, can serve as the motto of the entire pastoral ministry of the Metropolitan in various fields  economic relations, national relations, state building, interfaith and interreligious relations and, of course, personal life.

«Affirmative action» is another concept that was not used in Sheptytsky's time, but which was later formulated in order to prevent discrimination and compensate and equalize the rights of different categories of people. However, the approach itself has long been known, and in the Christian Church it has always been called ‘choice in favor of the poor’: “The care of the poor and the protection of those who do not know how to defend themselves, the equality of human brotherhood, is only the right to justice and love of neighbor, on which the whole law of the Gospel stands. This law instructs the clergy to guard the rights of the poor and to care more for those in need. This is what Christ did, this is what His servants and disciples must do” (Septytsly 2007,513).

Nowadays, there are so few people of the moral and ethical level of Andrey Sheptytsky, who care about difficult and controversial issues of today, ranging from economic growth and economic justice to the political discourse and practices of true democracy. And, perhaps, the most impressive aspect of the moral genius of Sheptytsky was his attitude to interreligious relations rooted in tolerance and search for interreligious dialogue that characterized him at the time of his maturity.

Considering the contribution made by the Metropolitan Archbishop of the Ukrainian Greek Catholic Church Andrey Sheptytsky makes us stop and think differently, encouraging us to clarify more deeply and more clearly the current realities and trends, as well as what decisions should be made and how we need to act.

The importance of studying the disciplines of historical and economic orientation by the EoF professional economists is difficult to overestimate, because, among other things, we can answer the question: who are we in economic life and what governs our actions? What prompted prominent economists to make their discoveries? In any part of the world, the training of a professional economist capable of making effective decisions should be based on studying local business experiences. Therefore, in the process of developing the new human-centered economic paradigm an important place should be given to the history of the economy and economic thought of Ukraine. Young economists should deepen their knowledge of the example of Andrey Sheptitsky as a spiritual, ideological and moral leader for all ages, and especially for the one in which EoF participants live today.

The EoF Marathon: the Ukrainan experience of implementing the human-centered approach in economy by Metropolitan Archbishop Andrey Sheptytsky